the 4th of July story

Ever seen a movie where an entire fireworks factory goes off all at once? Ever think that wouldn't happen because nobody would be stupid enough to stockpile fireworks without providing protection against a simultaneous explosion? ...

It was about 12 years ago. Our friends had come over for an evening of fun and fireworks. And to be sure we were well stocked on the bang-bang stuff, ALL of us bought individual inventories of explosives. We stockpiled them all together on our closed-in back deck. We had an extremely impressive array of armament. Enough to take on a small country. Of course we were stupid for putting everything in ONE large pile, but there'd have been no story to tell otherwise.

The teenager who lived next door really liked our little spinners (similar in shape to a roll of dimes with a fuse in one end that, when lit, spins in a tight circle like a dervish, flame shooting out, making a loud buzzing sound). He offered to trade a pack of bottle rockets for a brick of them. Sure, what the hell, a little male bonding never hurt (actually, that is NOT a factual statement - somebody usually DOES get hurt during male bonding). He lit his first one and threw the little spinning ball of flaming fury on the deck and it immediately spun directly toward the large Fort Knox- like mound of fireworks we'd so unwisley constructed.

There was hardly enough time to yell, "CRAP! DUCK!" before the carnage began. Like a ping pong ball dropped in a room full of mousetraps, the fireworks ignited where the spinner had gone in and spread almost instantaneously to the entire pile. Just like in the movies. We could only stay down in our protected positions until it was all over. Stuff was shooting in all directions. Grape-like bunches of fire-crackers were being blasted everywhere only to ignite themeselves wherever they landed. Bottle rockets of all shapes and sizes were launching like a squadron of angry wasps ZING-BOOM! ZOOM-BOOM! VWOOP-BOOM! The air was THICK with spent black powder.

When the acrid smoke had settled and the fury had died down to less frequent BOOMS and WHOOSHES, we were able to come out of hiding and survey the mess. 3/4 of our stock had exploded and the neighbor boy was nowhere to be found. Probably just as well. We weren't too happy with him at the moment.

So in answer to my own question, yes, I have seen what happens when idiots place a large quantity of fireworks in one place and the whole thing goes off. It WAS kind of exciting though. 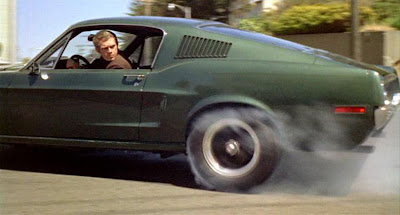 Imagine this car, but only bright red and not being driven by Steve McQueen...

When I was a teenager, my friend owned a high-performance Mustang. A '68, I think. His 'Stang was one of the greatest cars to ever roll this planet. This was back in the days of muscle cars and this one was a Bad Ass. Just the sound of it used to excite me.

Anyway, one evening we were cruising a local town, and a hot Camaro pulls up next to us at a stop light. Oh, yeah! The obligatory engine challenges began - ROOOOMMMMMMM, ROOOOOMMMMMM. A mechanical war or words.

My friend decided to go for it. This Mustang could STOMP on that Camaro. Red light, red light, red light, GREEEEENNNNN! He stomps on the accelerator and the thing lights up the tires, and we ROCKET ahead of the other car. He slams the transmission into 2nd and it was like kicking the thing in the ass, retro-charger! Next gear - well, uh, he missed 3rd gear, and threw it back into 1st instead. BOOOOOOOMMMMM-ssssssssssssss! The Camaro shot past us and down the road.

Blew the radiator hose right out of the sucker and steam was pouring out of the engine.

Kind of an embarrassing moment. Just thought I'd bring it up again, Three Beers, heh, heh, heh...
Posted by bonsairick on 7/03/2009 3 comments

OK. Another iPhone app. Real Racing by CloudCell. This one was a bit pricey, but the reviews were AWESOME. So I gave it a try. It IS awesome! This is a video of my first time trial. I call myself Rico Fabri. Cool, huh?

The guys are saying, "YEAH!! THAT'S COOL!! I'M GONNA GO BUY AN IPHONE JUST SO I CAN PLAY THAT!!" and the women are saying, "That's the dumbest thing I've ever heard." Notice the women don't use ALL CAPS. They don't need to - they're in control. 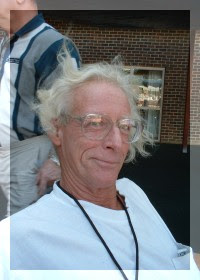 Khen (Ken) Moore, a friend of many, many people from science-fiction fandom passed away June 30.

I first met Khen at Kubla Khan in Nashville. We had some GREAT times together. But I can't remember much about them.

I DO recall a trip to a sci-fi convention in Evansville Indiana. Khen and a bunch of friends, Sue, Mike, Terry, Duke, Dan C., Allan S. and I were crammed in a hotel room. Not that we were all STAYING in the same room - that's just where we wound up after the party. Many of us on the floor. Khen was sleeping UNDER one of the beds with just his feet sticking out.

As was tradition, someone had to play a practical joke on Khen. Somebody had one of those tansferrable tattoos, stuck it on the toilet seat upside down and told the rest of us to NOT use the facilities for a while. Khen got up, bleary-eyed, went to the toilet and in a minute we heard this loud expletive from the bathroom. When he got up from the toilet, he felt something sticking to his butt and pulled off the plastic backing, thus completing the butt tattooing. And as always, he just laughed about it.

I seldom saw Khen when he wasn't smiling.

Gonna' miss you and your pink bunny slippers, Buddy.
Posted by bonsairick on 7/03/2009 3 comments 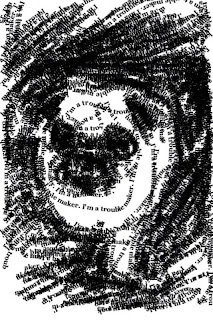 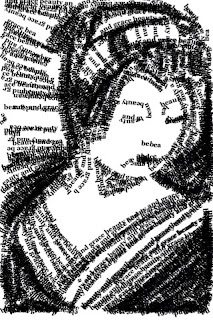 If the iPhone doesn't win an award for bringing about great, positive, societal change, I'll be shocked.

I don't know about earth-shattering societal improvement, but THIS iPhone application is down-right FUN:

These drawings (my first attempts) were created on the iPhone using an app called TypeDrawing. You write out whatever you want to say, in the case of the geisha, I wrote "beauty and grace" and for our little trouble-maker pug, Jiang Wei, I wrote "I'm a trouble-maker." Then you choose a font size, weight, paper color, or in my examples a photo from my library that I can draw over. Then you just have fun using your finger to draw with type! I haven't messed with changing fonts or sizes of fonts and may even be able to change the color of the type. Haven't gotten that far yet.

When I was a kid, Dick Tracy, a cartoon detective had a really cool device called a "wrist communicator". I ALWAYS wanted one of those, but of course, it was still fiction. Not any more. iPhone is here.
Posted by bonsairick on 7/01/2009 1 comments

Moment of decision and courage ... 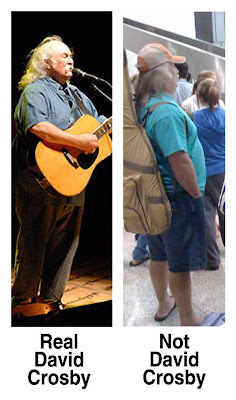 I'm a coward. I will NOT walk up to a celebrity and say hi. But in this case, well, let's just say the guy was one of my all-time bestest childhood idols - David Crosby (from CSN and sometimes Y).

And as I approached, I could see quite clearly that it was HIM!!!! He even had his guitar strapped over his back as if to say, "Yep, it's me."

The moment of decision and terror ... can I say hi? Oh, what the hell, I'm wearing a Depends so if it IS him and I piss my pants, it won't show. 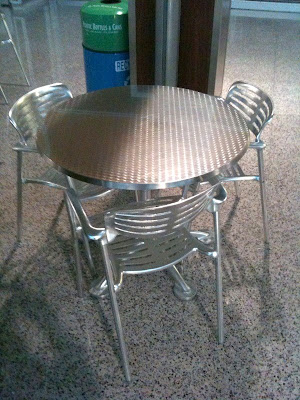 This is the seating in the Austin Airport Food Court ... I think they may have been designed by a coroner. But at the end of the day, they can just hose them off.

Well THAT scared the crap out of me! 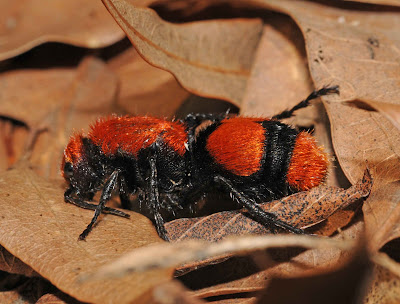 I was cleaning up some old rotten wood behind my house and THIS crawled out. Scared the poop out of me. I looked it up on the internet - it's a Red Velvet Ant also known as a Cow Killer. I'm not comfortable with something living where I walk barefoot that is capable of killing a cow. It's actually a wasp. And the females, like the one I found, CAN sting.

I guess I watched way too many cowboy flicks as a kid. Having just ordered a machiato latte at the airport in Austin, Texas, I expected the server to read the order back to me in Texan. Something like, "Wall, Pardner, here's yur sissie Macho Lay-Tay Joe. Now git the hell on down the road to where-evers it is you come from Sissy-Boy. Scat!" No one has uttered the word 'scat' since my Grandmother passed decades ago.

But apparently I'm either a Texas-bigot, or things are a changing down this away because he pronounced it the way any good coffee shop employee would - Mah-kee-ah-toh Lah-Tay. It surprised me. Enough so to write this useless observation.