I said I'd feed the cats and dogs while you were gone, but you didn't say anything about the raccoon ... 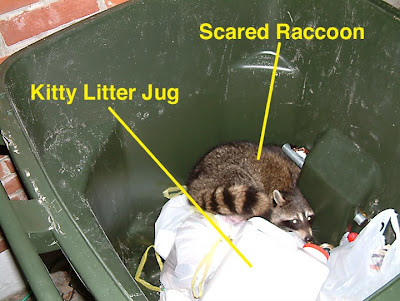 I came home from a shopping trip tonight and noticed a kitty litter jug in the yard. That's nothing unusual around here. But I decided to go grab it before the neighbor started giving me the evil eye. And oddly enough, decided to actually DO something with it after I'd fetched it rather than just tossing it in a corner. Yes, I'm one of those neighbors you dread having next to you.

First, understand that the city of Jeffersonville made, I repeat MADE us buy these HUGE, $60 trash cans that closer resemble minivans than they do trash cans - I mean they are CAVERNOUSLY HUGE! Fortunately, they have an EASY-OPEN, hinged top on them so I didn't mind making a trip to the can with the kitty litter jug.

So I flung open the lid of the trash can and tossed in the kitty litter jug and just as I did, I caught a slight movement out of the corner of my eye inside the can.

Garbage isn't supposed to move, my brain told myself.

Then my brain told me to shut the can. I did as my brain ordered. But I rebelled against my brain as the synapses began to align and a picture of what I'd seen began to take shape - fur, striped tail, another, smaller brain telling ITSELF IT didn't see anything EITHER. To stay still, maybe the big pink thing that hit it in the head with the plastic jug would go away.

I opened the can quickly. YEP! And slammed it shut.

What do I do? There's a raccoon in my trash can!

I used to work for the Humane Society in another city and even though raccoons are cute as hell and we convince our kids as such by giving them stuffed dolls of them, those little suckers can be VICIOUS. And carry rabies. I've seen them pissed.

But it's cold out here, I'm freezing, back inside to figure out what to do. Maybe he/she will be gone when I go back (bounce to the future - no, he/she was still there - I don't think it can get out of the HUGE can).

There's plenty of food in there for it to eat, so I may have to leave it in there overnight until I can figure out what to do. I sure as hell don't want to try anything at night.

But I just KNOW, I'm going to forget that the damned thing's in there. And I'm going to take out the trash tomorrow and scare the piss out of myself AGAIN!!! Maybe I should leave myself a note tonight before I go to bed. Yes, that's what I'll do. I'll hang it on the door:

RACCOON IN TRASH CAN.
FIGURE OUT WHAT TO DO.

PS. WRITE NASTY LETTER TO CITY ABOUT THOSE OVERSIZED, $60 RACCOON TRAPS THEY SOLD US.
Posted by bonsairick on 2/28/2009 2 comments 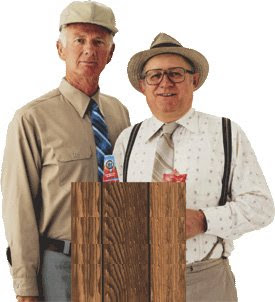 1987, divorced, living on the river in an apartment. Lonely. Real lonely.

So I decided to get some companions. I talked the guy at one of the local liquor stores into giving me his Bartles and Jaymes life-size cardboard cutout display. Frank and Ed became my best buddies. I put them in the window of my 2nd floor apartment so it looked like I had visitors. Yes, I was that desperate.

One thing that explains a lot is that I drank liquor back then. Lots. And one of the many side effects was I forgot a lot too. Like, for instance, I kept forgetting that Frank and Ed were there. So every time I'd walk into the room, I'd piss my pants because two strange fellows were standing in my living room waiting to attack me ... AAAAHHHHH! Or I'd be staggering home from the local bar and look up at my 2nd floor window and see the silhouette of two guys standing in my apartment ... AAAAHHHH! They're going to steal the 13" black and white TV with the broken antenna that I got in the divorce! Bastards!!

At some point I BOUGHT a Mr. Spock (Star Trek) cutout to go with Frank and Ed and put a speech balloon on him that said, "THIS DOES NOT COMPUTE." and stood him next to my computer. Clever, huh?

The four of us could have played poker more often but Frank cheated a lot and Spock, well hell, who can beat him? So we spent most of our time singing old Beatles songs and watching the 13" TV. Spock, of course, had to watch Star Trek on Sunday mornings. Ed snores a lot.

I have no clue where the Frank and Ed cutouts went. Maybe they stole themselves. Spock WAS in the basement but got wet when our basement flooded. I WILL tell you, true to the end, Spock wrinkled up in a highly logical manner.
Posted by bonsairick on 2/27/2009 2 comments

Attack of the sourdough monster 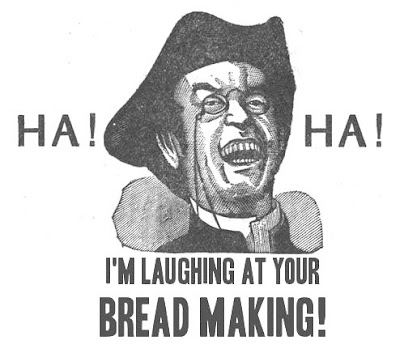 I wanted to learn how to make sourdough bread. So I did. I got some starter and a recipe and in no time had a pretty good little factory going. Hot, sourdough bread ... OH YEAH!!!

I was single at the time and was living in an apartment.

I'd been away this particular weekend and when I returned Sunday night and unlocked the door, the smell was the first thing to hit me. It smelled like a baker had gotten drunk and had barfed everywhere. Pretty descriptive, huh? Sorry.

When I went into the kitchen, I discovered the source ... here's a tip from me to you ... if you ever make sourdough bread - DO NOT put the starter in a sealed glass jar and keep it on your kitchen counter over the weekend – it WILL explode and by explode, I don't mean "klink" it cracks and two pieces fall apart - no - KABOOM!!! A hideous dough monster was hanging from beneath my kitchen cabinet quivering and making gurgling, gaseous sounds. It was enticing me to approach it. I'm sure it wanted to absorb me like an amoeba. I didn't do it. I was wise to its ploy.

So much for my sourdough experiment.
Posted by bonsairick on 2/27/2009 0 comments

My favorite quote from his page so far:

I'm going to get a medic
alert bracelet and leave it
blank and when I die they
can fill it in accurately.

A morbid dread or fear of developing a phobia.
Posted by bonsairick on 2/25/2009 0 comments