Gone With The Wind? The Lady Eve? Citizen Kane? ... sorry, they're ALL amateurs ... THIS is REAL cinema 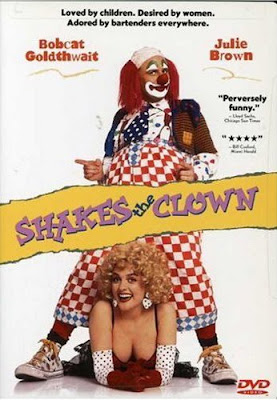 If you like drunken, foul-mouthed, evil clowns hell-bent on having a good time.
Posted by bonsairick on 12/06/2008 0 comments

Art. No more need be said.

I've been inspired and am turning over a new leaf 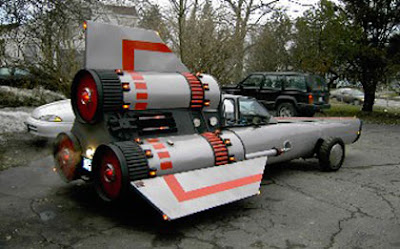 The Big 3 auto auto makers have inspired me. My employers have inspired me. I've become cash conscious. No more money guzzling for me, no siree. In the future, when I travel around the country on assignment, no more of those fancy SouthWest jets. This is my new method of transportation - 450,000 mpc (miles per dilithium crystal).
Posted by bonsairick on 12/06/2008 0 comments

OK. The price of cars compels me to say something about this. The bastards in their SUV’s that think they own the road while they SUCK gasoline out of the planet COMPEL me to speak…

Screw the Big 3. They’re on the Hill today whining to Congress about how they want some of what their Big Brother Bankers got. Screw them too.

Why do I offer this volatile opinion? One, nobody reads this blog anyway, so I really don’t care if I offend anyone (besides I’ve reached that cranky stage in life where I’m supposed to sit in the corner and mumble to myself incoherently, which I do). And two, I heard more bullshit on the news today that further toasted my tortillas, which is what this rant is about. And if you are that one person that reads my crap, you’ll notice I usually focus on humor as I hate dealing with this crap. On with the crap:

Remember when the bastards from GM, Ford and Chrysler flew to appear before the Big Wigs in Washington? – Flew in private jets to ask for 25 gazillion dollars of your and my money so THEY (poor paupers) wouldn’t go broke (BASTARDS!)? And then when they got there, Congress asked them a simple, logical question, what are you going to do with the money? They hadn’t a clue. THAT should have told Congress something right there. But no, Congress gave them what every spoiled, undeserving child wants, the coveted “do-over”. Go home boys, actually THINK this time, make up some shit, put it on paper so when we give you the money we won’t look quite so stupid. OK? So off they scurried, back to Detroit.

Well, they caught a lot of crap about the private jet thing. Their perception of the public must be pretty bad if they think they can fly in on a private, $5-million Lear jet, with a stocked bar, movies, fine dining, etc. and think nobody’s going to pay any attention to the fact that they say they’re “hurting for money”. Duh.

Last week, one of them, I don’t remember which, filed papers with the FAA allowing them to NOT make their flight plans public. Hmmm. No deception there, huh. That helps us trust you already untrustworthy jerks.

Today, a week later, they all drove hybrids to Washington. Yep. Well, that’s what we wanted them to do, right?

Ever heard of Greyhound a**holes? Now THAT’S the way folks that are barely hanging on and are needing to borrow $25 gazillion dollars SHOULD travel. Or why don’t all three of you Hybrid share? I’d love to see all three of their tubby asses stuffed in that Hybrid, smelly feet on the dash, Burger King bags on the floor. GM snoring in the back seat. Chrysler at the wheel because he won't let anyone else drive and Ford trying to get everyone else to join in on "Ninety-nine bottles of beer on the wall". That would do my heart so much GOOD!!! It does my heart good just visualizing it.

I wanna puke. I mean seriously. How f**king transparent can they be? How stupid can we be?

Have you ever seen the movie Mystery Men? GREAT film! Super heroes with dubious super-powers like the Spleen (Paul Ruebens) who’s power is the ability to fart and empty a room; Mr. Furious (Ben Stiller) has the uncanny ability to throw temper tantrums, often on tabletops or the hood of vehicles, usually to no avail.

And then we have Invisible Boy (played by Kel Mitchell). His talents are as listed: Powers/Abilities: Able to turn invisible, but only when no one is looking at him and when he is naked.

These jokers from Detroit remind me of Invisible Boy. While you’re watching them, it’s quite clear what they’re up to. When you’re NOT watching them, they’re running amok.

For God’s sake. Do they really think anyone on this planet actually thinks they’re going to get back in the hybrids to RETURN to Detroit once the sheep (baaaaaah) in Congress give them their gazillion dollars. Oh hell no.

Do the letters AIG strike any chords with anyone? Different industry, same invisible, naked guys.

Thanks, Mandy, I'd forgotten about the BLT story.

I used to drink. A lot. I don't drink anymore. This is just one of the million reasons why:

My wife and I were on a cruise. It was the middle of the night. She was sick, so I'd tucked her in to bed and had ventured out on my own like the song goes "the ruler of the night". Well not really, but it sounds cool. Do they really say, "Wrapped up like a douche, you know the ruler of the night?" I don't listen to lyrics very well.

Anyway. Alone. Drinking. Gambling. Hungry. 4 bad states for me to be in. By about 4:30 in the morning, I'm predictably wrecked. The boat is swaying, but I'm right in tune as I'm swaying in time to it. I stagger back to the room.

And I climb into the upper bunk being careful to not awaken my wife. Yes, I'm a cheap shit, bunk beds.

Then the thought hits me, must have BLT's.

So I climbed back down to use the phone, how I managed to not wake her or break my neck is a mystery.

If you've never been on a cruise ship, I'll tell you now, one of the COOLEST things about a cruise is that you can eat 24 hours a day for free. Room service is free. And they'll bring you anything they have and as much as you want as long as you tip them. So the person on the other end of the room service line never faltered when I ordered seven BLT's. Why seven? Hell, I don't know. I was hungry. They were free. And I'd just finished gambling (though I NEVER bet on 7).

So I climb BACK up the ladder to the bunk. And promptly pass out.

Knock at the door. OH, SHIT! DON'T WAKE UP MY WIFE! I clamber back down the ladder not killing myself again. Open the door and there stands the room service guy with a large mistake on my part. I hadn't visualized how much food seven BLT's actually was. The guy glances past me (he could see the entire room it was so small) sees just my wife sound asleep, sees my drunken ass, looks at the HUGE tray of BLT's and I'd love to know what he was thinking.

I hand him a tip. And off I go with food in hand. I slide the tray, which more resembles the hood of a 57 Chrysler onto the top bunk, I scramble up the ladder, nestle in next to the tray and prepare for my feast.

The next morning, I don't feel too good. My head is doing the boingy-boingy thing and I can't remember a whole lot about last night. And there's this god-awful smell. As my eyes open, "Ahhhh!" I'm face-to-face with an alien shape. It's a BLT. I bolt upright. Now my head REALLY hurts and is screaming at me, "MOVE SLOWLY DUMBASS!". As my eyes adjust, I discover I'm surrounded by a posse of seven BLT's and only one of them has a single bite taken out of it. I hadn't eaten any of them before I passed out, but I had managed to thrash about in them as I fitfully slept, so they were scattered everywhere. I hadn't eaten them, I was wearing them.