Why can't Hollywood read a book? 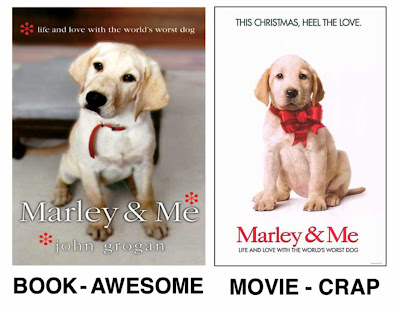 WARNING! IF YOU'RE NOT OF THIS PLANET OR YOU HAVEN'T HEARD HOW THIS BOOK/FILM ENDS (ACTUALLY THEY ARE COMPLETELY DIFFERENT) THEN DON'T READ ANY FURTHER. IF YOU HAVEN'T FIGURED IT OUT FROM THE GRAPHIC ABOVE THOUGH, THE BOOK WAS WONDERFUL. AS FOR THE MOVIE? - WELL, I'D HAVE FOUND IT LESS PAINFUL AND FAR MORE ENTERTAINING TO SET 18 DOLLAR BILLS ON FIRE AND WATCH THEM BURN. ANYBODY WANT A FREE DVD? I WOULD NOT TORTURE MY FRIENDS OR FAMILY WITH THAT CRAP.

I didn't want to read this book because I'd heard it was a tear-jerker. I expected Old Yeller rehashed. But I took a chance. I like to savor my books and read them slowly. Steadily, but slowly. I read Marley and Me in one day. On a business trip to Tucson. I finished it during the worst turbulence I have EVER flown through - and I LOVE turbulence - I sit in the back of the plane so it's rougher. Everyone on the plane is hanging on for dear life and I'm back there with my reading light turned on, doing my best to keep the book stationary relative to my face as the plane pitched and dove. I wasn't sure WHO was going to die first, Marley or ME. But I wasn't ABOUT to put that book down.

The thing I liked so much about the book was how the author John Grogan made Marley a subplot to the story. This was a story about a FAMILY, not a DOG - a family that just happened to have the "world's worst dog". In the book, there are a series of events that happen that give LIFE to the story. They are the CHARACTER of the story itself.

In the movie, the schlock screen-writers took these wonderfully funny events I referred to and condensed them into a 30-second monologue delivered by Owen Wilson's character (the real author, Grogan) with the sensitivity of a machine gunner mowing down the enemy. He was speaking so quickly I couldn't even follow what he was saying, and I'D READ THE BOOK! These two bozos all but eliminated the meat of the story!!!! All they left was the dog crapping out at the end. That's what I'd feared the book would be, some schumltzy tear jerker with absolutely no substance. But the book wasn't like that at all. Yes, it was sad, but it had substance. The movie - zero substance. It was the Twinkies of Marleydom.

I also feared the book would just end with Marley dying. It didn't. It ended, as I recall, with a wonderful scene in which John Grogan goes back to work writes about Marely's death and the next day after the column appears, discovers hundreds or thousands of emails, and letters from his readers about how THEY had lost their pets. And how much his column helped them remember their furry friends. It was a give and take of human emotion, strength and love. It MADE the book worth reading. And the way Grogan tied it all together at the end was truly heartwarming.

Now THAT's how you END that story. At least the true story, written by a real writer.

In the movie, they dig a hole, dump the dog in, say a few contrived lines and the screen goes to black. None of the emails or letters from the column readers appear anywhere. Even in the Extra Features section, that WONDERFUL part of the book is nowhere to be found on this movie. The Gag Reel however, was appropriately named - Gag.
Posted by bonsairick on 4/01/2009